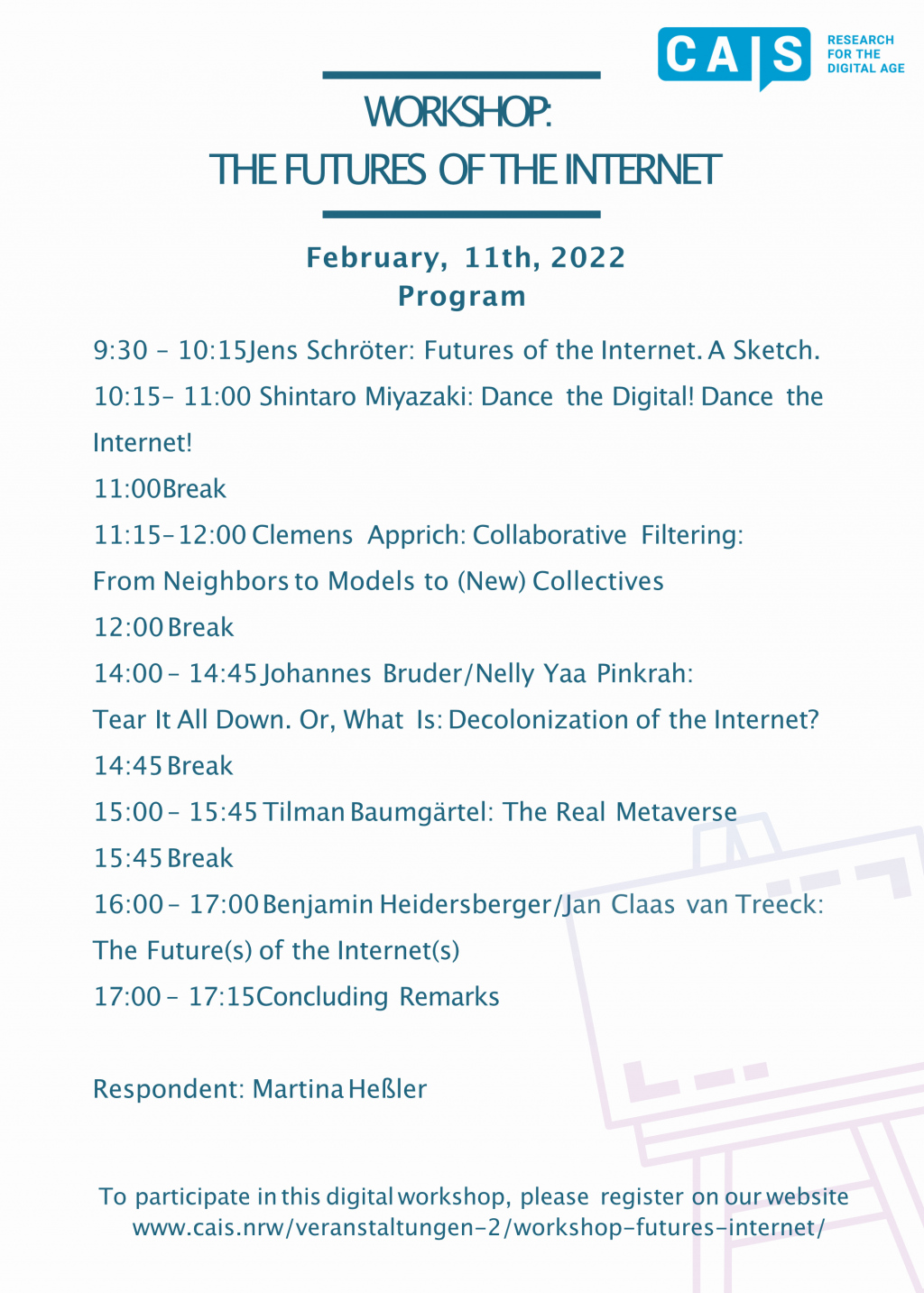 The Futures of the Internet

In chronological order, as in the workshop.

I will take up anti-capitalist theory from several fields such as Commoning, Value-Form-Critique and STS in order to focus from a German media studies point of view, inspired by the Bonner Programm für eine neokritische Medienwissenschaft, on a media theory, which helps to imagine, plan and experiment with alternative forms of digitality. Thereby I am interested in the notion of dance and its entanglement with social movements, the body as a medium, but also environmentality. Here new networks are necessary and therefore this topic is also a question of/about the Internet s future.

The idea that we collaboratively filter meaningful content from an ever-growing stream of data was already central in the Internet use of the 90s. Three decades later, automated recommendation systems have taken over this idea. Looking back at the ‚forgotten history of early net cultures, I want to discuss the impact of collaborative filtering on our everyday media practices and their possible future.

Dr. Johannes Bruder (Basel)/Nelly Yaa Pinkrah (Lüneburg):
Tear It All Down. Or, What Is: Decolonization of the Internet?

Futures of the internet decisively rely upon the decolonization of its many parts, so it seems. From data colonialism and discriminating machine learning systems to indigenous AI: the internet is to be decolonized. But what exactly does that entail? Why, in this moment in time, do we need the language of decolonization, the perpetual reference to and repetition of indigenous or marginalized lifeforms, that become the grounds to imagine anything that s left of our futures? And where and what are the limits of decolonization?

A number of companies and media experts are currently trying to sell us the Metaverse as the future of the Internet. Even though the technical details are largely unclear so far and the few elements of the architecture that already exist have unmistakable deficits, technical tomorrow is supposed to be brought to us as inevitable, in which we immerse ourselves in three-dimensional virtual worlds with headsets. But to many, the metaverse appears as a dystopian nightmare (Hanke 2021). As early as 1992, Neal Stephenson described the metaverse in his gloomy SF novel Snowcrash (1992), from which the term derives, as just the kind of future that has to be avoided at all costs. After two years of a pandemic, during which most people have probably sat in front of their devices for far longer than they might have liked, one also wonders whether the answer to this period s networked alienation is really to spend even more time in virtual parallel universes - especially ones where a company like Facebook is currently trying to secure dominance.
Yet we may already be facing a kind of metaverse without having really noticed it yet: augmented reality (AR), which allows its users to extend their own reality with virtual elements. Via devices such as smartphones, tablets or AR glasses, 3D objects, texts or information can be added to one s own field of vision. The possibilities that arise from this are not only diverse, but also include options that are actually only promised to us for the metaverse.
The talk will ask the question whether AR has produced its own aesthetics out of its technical qualities already - a question that has hardly played a role in media and art studies so far (an exception is Manovich 2006). The superimposition of a real space with objects based on a Cartesian 3D coordinate system ultimately leads to fundamental questions of sculpture and the artistic recreation of reality. This naturalistic mimicry of reality is, of course, also deliberately sabotaged or questioned by many artists, so that the concept of AR and VR technology as reality media (Bolter, Engberg, and MacIntyre 2021) needs to be questioned.

Extending a discussion published late last year in Navigationen Benjamin Heidersberger and Jan Claas van Treeck will debate whether there is still something like an internet – or to which degree it already has fragmented into segregated internets still entangled but increasingly separate as physical territories and their rivalling political systems and visions are battling with the ideas that created the internet in the first place.
One of the precursors of social media on the internet might be Van Gogh TV in 1992. A starting point that was very much indebted to the early liberal vision of what the internet could be. Heidersberger and van Treeck will try to trace the historic development from such liberal/libertarian projects into the multitude of extrapolatable future(s) of the internet(s) .